Reptile Spotlight: All You Need to Know About the Growling Grass Frog

Frogs are an important part of the wetlands, but there are some that are disappearing. The Growling Grass Frog is one of these frogs. From tadpoles, they can be different from other frogs. Even their diet is a bit different! 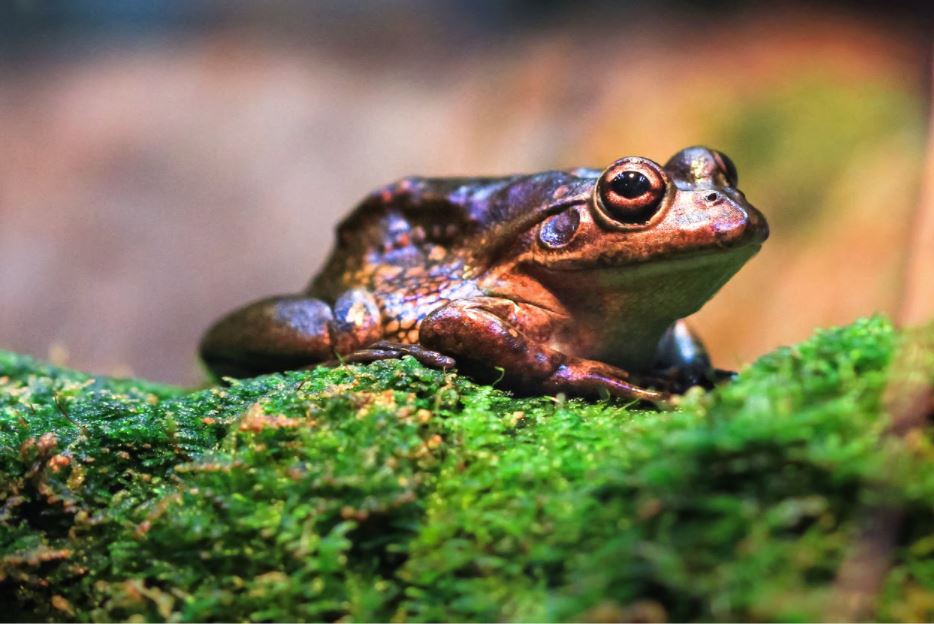 An adult growling grass frog sitting on a bed of moss.

How to tell the Growling Grass Frog from other frogs?

The Growling Grass Frogs (Litoria Raniformis) have a similar colour to other green and gold frogs. You have to look closely to determine if the jumpy creature is one of these. While their legs have the typical green you see with frogs, there are other colours involved.

At almost 10 cm, it’s a medium-sized frog. There is a stripe down the side of the frog that is a pale skin fold. Their bellies are a cream colour that looks like tiles. Spots and lumps cover the back of the frog in a dark or copper colour. Its eardrum is visible as a coppery circle toward the back of its head.

August begins the breeding season. Males will develop a darkened pad on their thumbs when it’s time for them to breed. The males will begin calling in August for the females to mate, but the laying of the eggs won’t happen until October or November.

Female frogs generally lay the eggs in a loose pile in the water. It takes at least two days with the right water temperature for those eggs to hatch. Tadpoles are a green colour with a coppery stripe down their backs. It can take a year for the tadpoles to develop into adults.

Where does it live?

Growling Grass Frogs need the correct water temperature and slow-moving water to mature their offspring. They prefer areas with reeds and other floating plants. They use the rain to move between bodies of water. Furthermore, they use water that is not naturally formed like dams, irrigation canals, and unused quarries.

They can be found, according to SWIFFT, across south-eastern Australia. They can typically be found in the swamp areas of New South Wales (Riverina area), Victoria, Tasmania, and south-eastern South Australia.

Why is it called the Growling Grass Frog?

The frog gets its name from the sound it makes when calling. It starts off low, then becomes a higher pitch before returning to a low pitch. The frogs may even squeal or squeak when picked up. The calls they make can differ depending on the reason the frog is calling. Breeding calls of males tend to be a different sound than the lure they use for their dinner.

What do they eat?

Most frogs are carnivores, meaning they eat other animals. Their calls lure insects, lizards, and other small reptiles into the frog’s dinner table. Even other small frogs can fall victim to their siren’s call. Unlike most other frogs, the Growling Grass Frog sits still and waits for its dinner to come to them.
Endangered species list: Why are they disappearing?

The Growling Grass Frog depends on bodies of freshwater for its survival and movement. The increased salt content of the fresh waters from pipes and lowering of the water levels have added to the decline of the frog’s population. Infections on the frog’s skin from bacteria that are hard to get rid of have also been lowering their breeding levels. New predatory fish have been killing more young frogs before they have a chance to grow up.

While they continue to be threatened, there are a few projects ongoing to help increase their population. The Dams to Habitat Project started in 2007 and continues to study the growth of the frogs. Remember to visit Reptile Encounters to see our friend the Growling Grass Frog and learn more!

PREVIOUS Frog Bog: 6 Simple Steps to Build One
Make sure you check out the Horsham Show off on Su

Some cool fun changes are happening here at Reptil