Bats No Fans Of The Heat

While many of us welcome the warm Melbourne weather, some of our animal companions are wishing for cooler days.

Reptile Encounters director Josh Cox said with new groups of baby bats popping up around Melbourne, he wanted to raise awareness about how grey-headed flying foxes reacted to the heat.

“Bats get quite a negative run, but it’s still important to care for them,” Mr. Cox said.

“They really struggle on days where the temperature reaches 35C.

Some struggle with the heat so much that they die.”

Mr. Cox said bats had mechanisms to cool down on warmer days, and the public should not be alarmed if they saw them in action.

“Bats like to flap their wings to fan themselves,” he said.

“I know some people may be afraid of bats, especially when they’re flying low.

If people see a bat on the floor, likely because of the heat, the public should call Wildlife Victoria.” 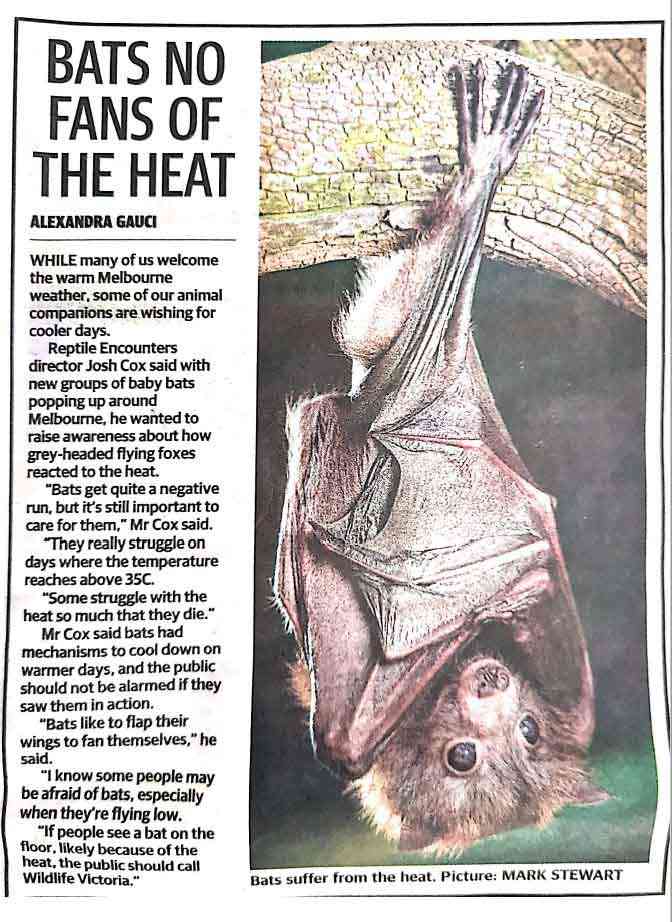 PREVIOUS Babies Get The Hang of Fame
NEXT I Buy Local
Happy Birthday to our awesome director, Josh! We

How cute is Gumnut??? If you want to meet Gumnut

You can learn more cool facts like this by joining

Check our home page for our booking site!!! See yo

Make sure you check out the Horsham Show off on Su